In November, 2017, the Business Voice wanted to hear about how we at Phoenix collaborate with youth to make a difference. Jessica provided her story about how Phoenix made a difference in her journey to becoming a nurse.

At just 17, Jessica Blaikie was living in a women’s shelter and struggling with mental health challenges. She joined a Phoenix program on resume development and job interview skills at the Phoenix Learning and Employment Centre, and says that small decision ended up changing the course of her life.

She began participating in more of their programs, and moved into Phoenix House at 18. Blaikie still marvels at how her marks shot up from 60s and 70s to all 90s – high enough to see her graduate from high school with honours.

“They helped me get my marks up by providing tutors, and they pushed me to be the best person I could be,” says Blaikie. “They were amazing.”

Before living at Phoenix House, Blaikie admits she’d been kicked out of every other group home or shelter she’d tried living in – not because she was a troublemaker, but because of complicated mental health issues.

“I had it stuck in my head that everybody was going to toss me aside, but Phoenix never did that,” says Blaikie. “No matter how much I pushed or struggled, they gave me chance after chance to show me they cared about me.”

Even when she moved out of Phoenix House and into her college dorm in Truro, she remembers they still called regularly to check in. When she was in the hospital at one point, Phoenix staffers drove up to visit and brought her chocolates.

“Phoenix does one thing that no other group does that I’m aware of, and that’s show the kids that they’re family,” says Blaikie. “Just because you ‘age out’ and move on doesn’t mean they forget about you.”

“If it wasn’t for Phoenix workers showing me that they cared, I probably wouldn’t be sitting here today,” says Blaikie.

She proudly speaks out about her past to remind people of the difference Phoenix Youth Programs is making in the lives of so many young Nova Scotians.

“Phoenix youth are kids who need a little more understanding,” says Blaikie. “Phoenix is about supporting kids who may not have grown up with supportive, caring, compassionate adults in their lives or the resources other youth have. It’s about helping youth believe in themselves and achieve their goals.” 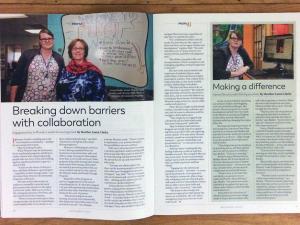